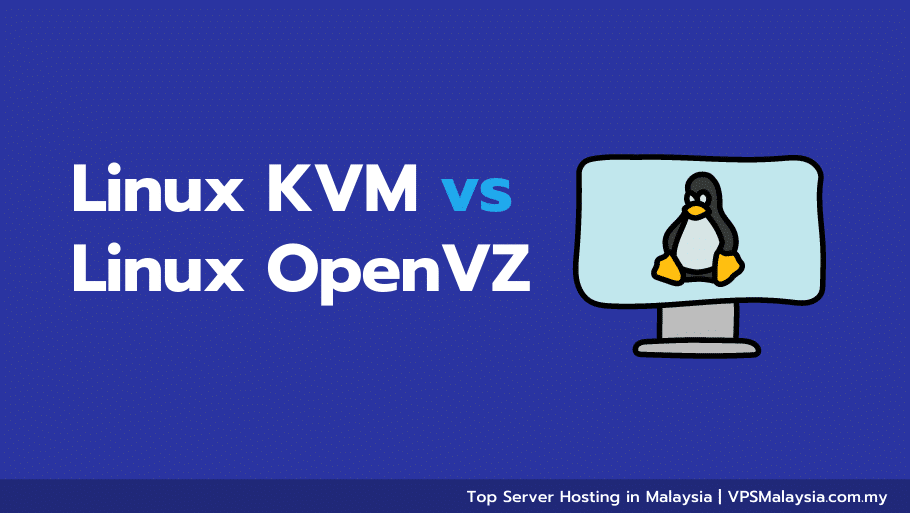 When making the decision to choose a Virtual private server solution, many website owners make their decision based on pricing and specifications but most often ignore virtualization technology.

Choosing a virtualization technology could be the difference between having a high performant and a poor application.

Thus, it is very important to understand what virtualization even is and the different kinds of virtualization technology available to enable you to make good decisions whenever you need a VPS.

In this article, we’ll go through everything you need to know about Linux KVM and OpenVZ including their differences and best use case scenario.

Virtualization is the process of creating a virtual version of something, such as an operating system, application, storage device, or network resource.

Virtualization allows one physical resource to be divided into multiple logical resources, each of which can be used independently.

Virtualization can be used to improve the efficiency and utilization of hardware, by allowing multiple operating systems to run on a single physical computer.

It can also be used to improve security, by isolating different systems and applications in separate virtual machines.

What is a Hypervisor?

A hypervisor is a piece of software (or hardware in some cases) that makes virtualization possible, its main function is to divide and assign hardware and OS resources across instances of Virtual machines.

A hypervisor makes it possible to set resources such as memory, storage, CPU power, and network bandwidth for any Virtual Machine created.
It can also be used to stop, restart, and destroy existing virtual machines on demand.
Both KVM & Open VZ are Hypervisors used by hosting providers to segment and create tiers of servers and share resources from one or a set of physical hardware.

Each Hypervisor has certain advantages over the other as well as disadvantages depending on the use case.

KVM which translates to Kernel Virtual Machine is an open-source hypervisor that lets you create and run multiple operating systems on a single computer (using a type 2 hypervisor).

Each operating system instance created is called a virtual machine (with its own separate dedicated kernel).

KVM is mainly used for creating virtual machines with Linux as their OS but supports other guest operating systems like Windows, Haiku, and Solaris.

Having been around for more than a decade, KVM is used by major companies like Google, Amazon, and Facebook.

Linux OpenVZ is an OS-level virtualization technology that allows multiple isolated operating systems (OSes) to run on a single physical server. Each OS is called a container and is equivalent to a virtual machine (VM) for KVM.

Containers, however, are much more lightweight and efficient than VMs, making them better suited for hosting multiple applications on a single server.

All containers you construct with OpenVZ share one single host kernel, which is packaged as a Linux distribution. As a result, OpenVZ does not have support for other operating systems.

Linux OpenVZ is also an open-source project and is free for anyone to use.

What is the difference between KVM and OpenVZ?

The key difference between KVM and OpenVZ lies in the way they handle virtualization.

Since KVM’s virtualization is at a hardware level, it is better able to completely isolate each virtual machine thus why it can support other operating systems and can be customizable to almost any length.

OpenVZ uses OS-level virtualization which essentially means all containers created must be Linux-based and share the same resources from the host’s kernel, this makes OpenVZ less customizer and more specialized for Linux-based applications.

The Virtual Machines created with KVM use the physical machine hardware resources directly which does have a lot of performance advantages over OpenVZ which relies on the host’s kernel.

The downside to KVM virtual machines is the fact that they have high overhead which essentially means high running costs.

Compared to KVM, OpenVZ containers can run with little overhead on their host’s resources since they don’t require a full-fledged hypervisor and depend solely on the host whose Hypervisor is kernel-based.

Also with OpenVZ, you have greater control over resource distribution with as much as 99% of physical hardware being assignable to containers.

For example, when physical memory (RAM) is not being used in an OpenVZ setup, it is available for any of the running containers to access.

If any of the containers decides to run processes that are RAM intensive, it will affect the overall performance of the entire container network (very common when too many containers are created).

For KVM, each virtual machine is created with hard limits which essentially means they can never use more than what is assigned to them even if there is extra unused memory lying around.

Both KVM and OpenVZ are completely free to use but when it comes to operating costs, KVM is more expensive and has a higher hardware requirement to operate.

This makes OpenVZ a favorite choice for companies on a budget and KVM better suited for larger enterprises that require more abstraction and isolation.

Is KVM faster than OpenVZ?

Can I run Windows inside an OpenVZ container?

No, and this is simply because OpenVZ is bundled with the Linux kernel and since it handles virtualization at an OS level, every container created must be based on the same Operating system, and in this case, that would be Linux.

What is The Key difference Between KVM and OpenVZ?

Linux KVM vs OpenVZ are both popularly used virtualization technologies that allow you to run multiple operating systems on a single server.

In this article, we break down the features of each virtualization technology, and concisely explained the key differences between them.

After reading this article, you should be able to know exactly which of these two technologies you need based on a use case.

We hope you found this article useful.

Forex VPS vs Windows VPS: What’s the Difference?
The Top 7 Benefits Of VPS Hosting For Your Business