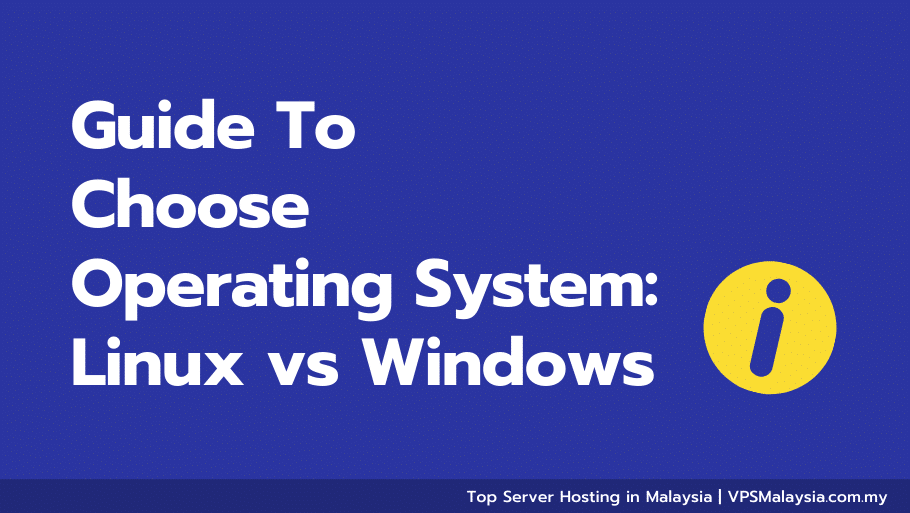 Virtual Private Server (VPS) is a small computer hosted in a mother server that provides you the environment to host myriads of applications. From hosting websites, hosting applications, to hosting new test environments, the uses of a VPS are countless.

In this article we have a list of 6 popular uses of renting a VPS.

You probably have already understood the many technical terms of having a VPS, such as, what is bandwidth, RAM, CPU, or what are the differences between HDD and SSD Storage.

If these terms sound strange, you should check out our guide on how to choose the most reliable VPS hosting for you.

It’s important that you know and understand these technical terms, so that you are informed about your purchasing decision.

Now, the next learning milestone for you is understanding the role of an Operating System (OS) in a VPS, and the differences between Linux VPS and Windows VPS.

What is Operating System (OS)?

Operating system (OS) is a software that allows a user to run other applications on a computing device.

If you have a laptop or a desktop PC at home, these devices most probably run on a Windows OS. A Macbook runs on Macintosh.

Laptops and PCs aside, smartphone devices also run on different OS. The two most widely used OS in today’s market are Android and iOS. VPS runs on two major OS: Linux and Windows.

Let’s dive into the differences between Linux VPS and Windows VPS.

In this comparison, we will be looking at 9 aspects:

Have you ever closed at website because the page loading speed is terribly slow? I’m sure most of us have been there.

This statistics tells us how important it is to have a fast page loading speed. The big question now is,

What is the difference between Linux VPS and Windows VPS in terms of performance?

VPS running on Linux is designed specifically to be secured with Secure Shell (SSH). SSH is used to manage VPS by typing in command lines. This trait makes Linux VPS more resource efficient. When there is high loads of resources, Linux VPS doesn’t require its administrator to perform regular reboots. A lesser number of reboots would mean a higher performance, since any applications hosted on Linux VPS is not susceptible to more technical hiccups.

Windows VPS are commercial products designed for common users. It uses a Graphical User Interface (GUI), that makes navigation more user-friendly. However, this comes with a downside. After every major/minor patch, and driver/software update, your Windows VPS must be rebooted, or will be rebooted automatically according to its internal schedule. Windows users most probably know this well, if you remember the scheduled computer restart following an update. The other downside of a Windows VPS is that it can be resource hungry if it is not optimized properly. This is because the Windows OS has a lot of pre-installed applications that takes up a lot of CPU power when running in background.

Cyber attacks are constantly on the rise. Common threats to a website include DDoS attacks, data breaches and malwares. Here are some facts and figures by CSOnline.com to give you a sense of how common cyber attacks are in the Internet.

Now we know the importance of cybersecurity, which of the two is more secure- Linux VPS or Windows VPS? Let’s dive into the details.

An important fact that gives Linux VPS its topnotch security is that Linux is open source. There is a huge community of professional coders who could review, detect and comment on its vulnerability. This also allows the bugs and backdoors to be fixed as soon as possible. But Linux is more secure also due to the reasons that it has a smaller user base. You’ll understand the justification quickly as I explain this in the security of Windows VPS section.

According to an estimate by NetMarketShare, 88% of all computers on the Internet run on Windows OS. That is more than two third of all these computers combined! With a user base this massive, cyber criminals are constantly prying on Windows OS, trying to find a loophole within.

Does Operating System affects the security of your VPS?

Well, the answer is yes, and no.

This article explains in-depth the comparisons between Linux VPS and Windows VPS in terms of security.

If we have to crown only one OS, Linux VPS is much safer than Windows VPS.

But either choices work well for users, so we’ll call it a tie in this section.

Having server access means users have a better control over configuration of their VPS. Which one is gives more flexibility to users- Linux or Windows? Can you guess?

File Transfer Protocol, or in short FTP is a convenient tool for users to upload and download files. Building a website, for example, requires FTP, because you need this tool to upload media (photos or videos) from your PC to your VPS. FTP is accessible on Linux. However, another server access that you want to have is a protection protocol, called SSH, available only on Linux.

FTP that gives you the ease to move files around is also available to Windows. But, SSH is absent on Windows OS. There is one way to go around this- installing PuTTY on Windows VPS. SSH.com has put together a useful guide on how you can use PuTTY on your Windows VPS.

Linux VPS definitely gives users more access to the server. Although Windows VPS don’t run on SSH, there are ways to get around. Linux VPS is slightly more advantageous than Windows VPS in this section. Slightly.

Building a website is all about customization and management of different settings and features. The control panel covers this pesky job flawlessly for all of us.

Whether it’s cPanel or Plesk, both interfaces are user-friendly. And again, a tie.

Technical issues are unavoidable when it comes to VPS or any other servers. What you need is a professional support team that can assist you at an instant.

Linux is backed by a huge community of professional coders. They are individuals who find examine source codes to detect and fix bugs and backdoors. However, the reliability of their support may not be the best you can find. After all, these professionals are not paid to do a 9 to 5 customer support job.

Windows is an OS developed by a massive multi billion dollar company called Microsoft. The company is well backed up by a team of professional IT supports that are ready to help you solve any problems at anytime.

Windows, with its worldwide reputation definitely has an upper hand in this section.

Whether you choose to host a Linux VPS or a Windows VPS, our professional customer support team is ready to assist you 24/7. We want to make sure that our customers get the best hosting experience at VPS Malaysia.

Back in the days, we always hear, “Whether it’s easy to use or not, it all depends on your technical knowledge.” However, this might not apply entirely today. Advancements and improvements have been made over the years. Let’s take a look.

Command lines- this used to be the enemy of all basic users. But looking at how GUI is now available to Linux OS today, it no longer applies any truths. Lifewire frames the usefulness of GUI and command lines in different situations perfectly in this article. In fact, cPanel that Linux uses is one of the most popular hosting management tool.

Windows brags its intuitive GUI as a highlighted selling point, which makes it very friendly to use for any users.

If you are a knowledge-seeker and you don’t mind Googling up some information on how to use Linux, Linux VPS could be a choice.

If you think that learning is too troublesome, and since you are already very familiar to Windows, then Windows is the perfect choice for you.

Scalability is the server capability to handle increased workload and demand without decreased performance, as explained by technopedia.com.

There are two main Linux VPS options in today’s market: Linux OpenVZ VPS and Linux KVM VPS. Both can be easily upgraded (this can be done via your control panel) to handle an increased workload. However, only Linux OpenVZ VPS can be downgraded, when required. Linux OpenVZ VPS also doesn’t require users to reboot their VPS after upgrade installations.

Windows VPS can be scaled up, but not scaled down. Changes only take effect after users reboot their server following upgrade installations.

You should consider your personal application of having a VPS.

If you’re expecting an increase of server workload to follow after a period of time, both Linux VPS and Windows VPS are suitable.

The advantage of a Linux OpenVZ VPS is that you are ready to downgrade anytime, and your VPS does not require rebooting.

The inability to downgrade and having to reboot are downsides to Linux KVM VPS and Windows VPS.

An open source platform itself, Linux has significantly lower costs. Linux OS doesn’t require you to pay a license fee every year. Most Linux software and applications are free to use too- all thanks to the generous developers.

Windows is a commercial product by Microsoft, so naturally users have to pay a licensing fee. Our Windows VPS plans include Windows licensing fee.

If you don’t mind paying a little extra for familiarity, then Windows VPS is the right choice.

If you cringe at the knowledge of having to pay extra every month, you should go for a Linux VPS.
Linux VPS has its advantages in terms of performance, security, cost and server access.

On the other hand, Windows is more advantageous in the aspects of support and ease of use. Looking at this, Linux VPS surely has scored more points compared to Windows VPS.

However, there is one important thing that you must consider- programming language. Linux and Windows both use very different languages.

The Choice Is In Your Hands

While you’re still deciding on which OS to use, have a look at our Linux KVM VPS Plans, Linux Open VZ VPS Plans, and Windows VPS Plans. With less than RM2 per day, you get to enjoy a full fledged, professional VPS hosting experience.

At VPS Malaysia, you can deploy your VPS in under 30 seconds. If you have any difficulties with your VPS, our professional customer support team is ready to help you 24/7, anytime, anywhere.
And here’s the biggest perk for you- 30 days risk-free VPS! What does it mean? You get to try our VPS, and if you are unsatisfied with the performance, we guarantee to give all your money back in 30 days. Try one of our VPS hosting plans today!